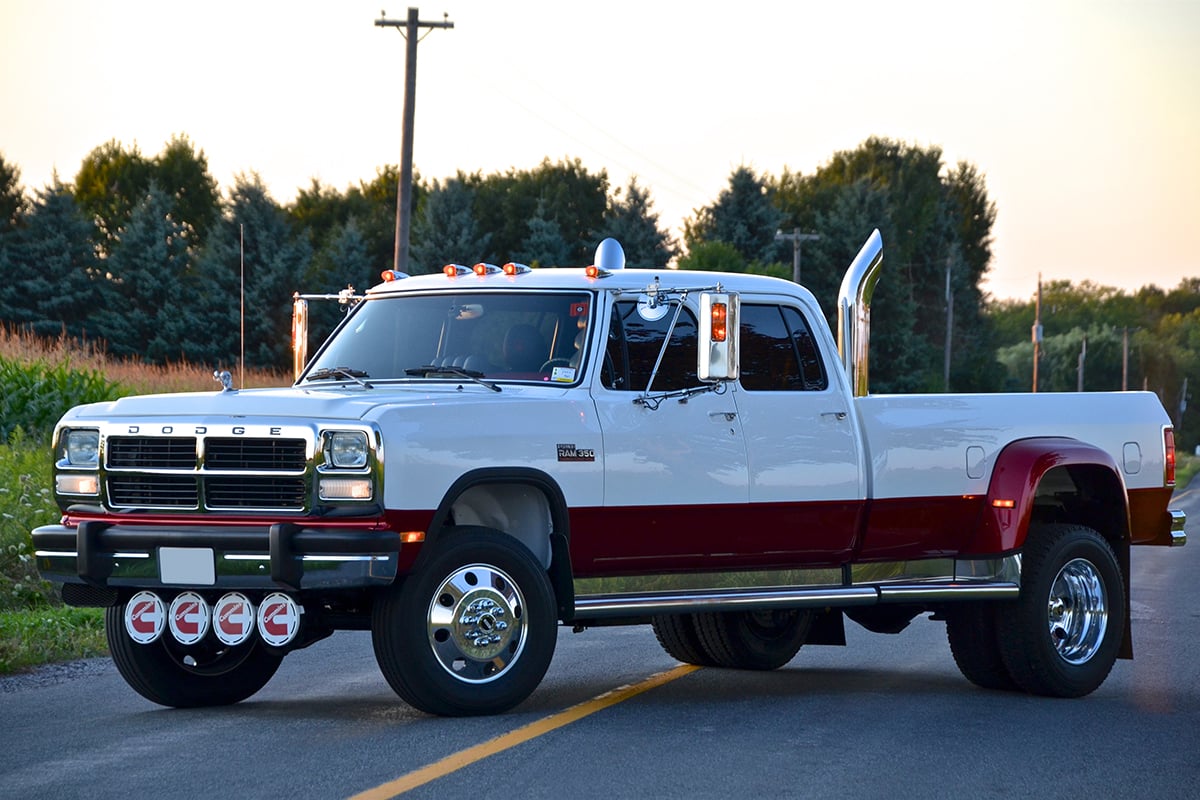 Robert was born into a Mopar family with his father having restored and owned many 1960’s Chrysler products. At fourteen months old, he first began making car noises as he moved the wheels on his stroller. At age seven, he began attending national shows. By eight, he had fallen in love with the automotive world. When he was eighteen, he was told by his father it was time to buy a vehicle of his own. His father had already arranged for him to purchase a 1990 W250 Ram pickup equipped with the 727 automatic three-speed. Years later, he found out the reason for this arranged purchase was due to the top speed of the truck being only 71 MPH. His dad had concerns that all the years of racing events would lead to some serious street racing issues.

After a year of owning the truck, Robert had acquired a list of things he wished he could change about it. This included the automatic transmission, lack of a back seat, and it not being a dually. He began the search to replace the truck. In 2004, he found a 1993 W350 that was mated with a 1980 D350 360 CID dually in remote British Columbia, Canada. The conversion was done by a company in northern Alberta. He made a call to the dealer and became the new owner of the truck! After a few weeks, it was delivered by rail to him in Ontario. Upon getting the truck home and logging a few hundred miles on it, he had a list of repairs that were needed. This included rebuilding the transmission, fixing the power windows and door locks, a worn engine and an almost blown rear axle. He decided to redo the entire driveline over the winter. This led to him keeping the 1990 Ram a bit longer until the new truck was reliable.

Somewhere in this, another issue came up. His father was assessing the truck and said, “If you are going to do the driveline, you should do it right and do a repaint.” Robert said there was no way he was going down that road. If he did a repaint, he knew he would allow his perfectionism to turn this into a restoration.

As the weeks went by, his father would randomly remind him “You should paint it.” After two months, he caved in. On December 24, 2006, he knew this was the beginning of a restoration. Little did he know, it would take until June 2019 until he drove it again. Being a perfectionist, he wanted this to be the best restoration a first-generation Cummins Dodge Ram had ever seen.

Over the next thirteen years, he began building a truck that had never been done. He wanted the ultimate pro-touring truck, so this called for custom suspension capable of smoothly towing heavy trailers across the country, excessive power for climbing hills, a heavy-duty transmission with more gears than most, strong differentials, comfy seats, lots of coolers to keep things cold on even the hottest of days, and a host of other parts to make this the vision he had in his head. Very few parts are available for these trucks, so much of his time was spent tracking down original factory parts to ensure the truck was restored factory correct.

The truck ended up being stripped to the bare frame with every nut and bolt removed. It was sandblasted in his dad’s driveway and then the assembly began. Every single nut, bolt, and part was either replaced with new, refurbished, or rebuilt. In every place possible, the components were upgraded. He installed the best components pulled from other Dodge vehicles. The rear Dana 70 axle was replaced with a 1998 Dana 80. The engine was replaced with a 1997 12V Cummins with a full build in his garage with a fully ported head, stage 3 Hamilton cam, compound turbochargers, and a host of other goodies to be able to reliably run 70 PSI boost. The transmission that started this all, was replaced with a custom home configured twin stick with splitter assembly giving the truck 24 gears. The setup is very similar to how a semi-truck is arranged. The interior seats came from a 2008 SRT Charger and were mixed with many custom home-made components to add a headliner to the truck – something that Dodge never did on crew cab models.

Having engineering in his background, his thirst for knowing what was happening in his truck became critical. Many diesel vehicles are built for quarter-mile power use, meaning if you held your pedal to the floor for more than the length of the quarter-mile, you would start melting pistons, things would overheat, etc. For this truck, he designed all components of the truck to be able to handle all day horsepower. That means towing his forty-foot trailer up the side of Eisenhower Pass, with the pedal on the floor all the way up and not needing to lift due to things overheating. This required many modifications including custom transmissions coolers and differential coolers that pump fluid through a rad and fan assembly, a 2002 Dodge Ram intercooler and radiator assembly for larger surface area for cooling, Horton fan clutch off a Freightliner, and most importantly, gauges wired throughout the driveline so all critical items could be monitored. In all, the truck has twenty-six AutoMeter Phantom series gauges. These gauges allow him to reliably monitor his components to alert him of issues before failure and also to monitor other less critical systems, like the four-wheel air ride system. As he is normally far from home, being able to be able to trust his hardware and have it proven by his gauges is absolutely critical. Being able to have all of the gauges match was also a requirement for him to keep the uniform look.

The largest undertaking of the truck was the custom wiring. The 1993 engine harness now mates with a section of a 1980 body harness and that connects to the 1998 engine, which all connects to the custom wiring harness that controls the over 40 relays and rocker switches built into the overhead console sourced from a Dodge Caravan. The wiring of twenty-six gauges was also not a small task. There are hundreds of hours of wiring in this truck, but it resulted in one of the cleanest wiring jobs done to a vehicle. Every individual wire is labeled on each end as to where the other terminates so in the event there is a wiring issue, diagnostics will be much easier.

In a world of vehicles purchased pre-modified or built with pre-fabricated parts available off the shelf, this is a “built not bought” vehicle. The parts he needed didn’t exist and he was often told that it could never be built this way. For him, this truck was born of the dream of an eighteen-year-old. Although it took more than a decade and more than 8,600 hours to make happen, he never gave up on his dream and vision.

To help inspire others, he has maintained a build thread on this truck since the early years of its restoration to help inspire others and show them how to do these modifications on their own. He hopes to show others that even though you may not be able to hire a shop to build your dream vehicles, that with some time and patience, you can build it yourself. The thread with more than half a million views and can be viewed here.

Robert has nothing but gratitude and appreciation to his father, who has been at his side through the entire build (and donated his garage space for the thirteen-year build!), to his friend Andy who spent almost every Saturday for the last three years of the build in his garage helping to reassembly the truck, to many coworkers, family, and friends who helped make this truck happen. He is also so grateful for companies like AutoMeter that create the products that enthusiasts like himself require, to be able to build the vehicle of our dreams.

Gauges: 26 Autometer Phantom series. Most of the Phantom line is in the truck including:

Fuel Tanks: 70 gallons via two tanks with a third in bed transfer tank

And about that 1990 W250…. twenty years later, he still has the truck his dad made him buy. Now it has a 24-speed twin stick and 13 AutoMeter Z series gauges to monitor the 1200 ft lbs it now runs through its driveline. It’s safe to say it is no longer limited to 71 MPH. In Robert’s words, “It’s funny how destiny works.”