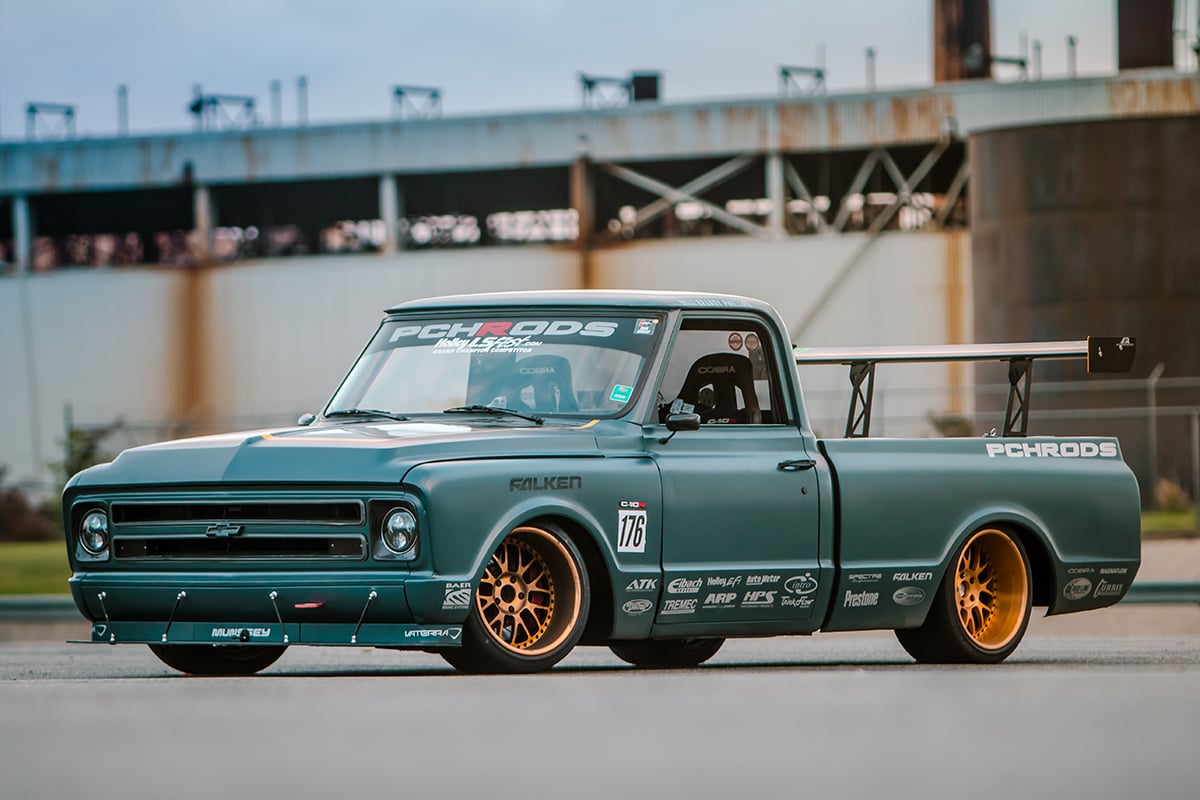 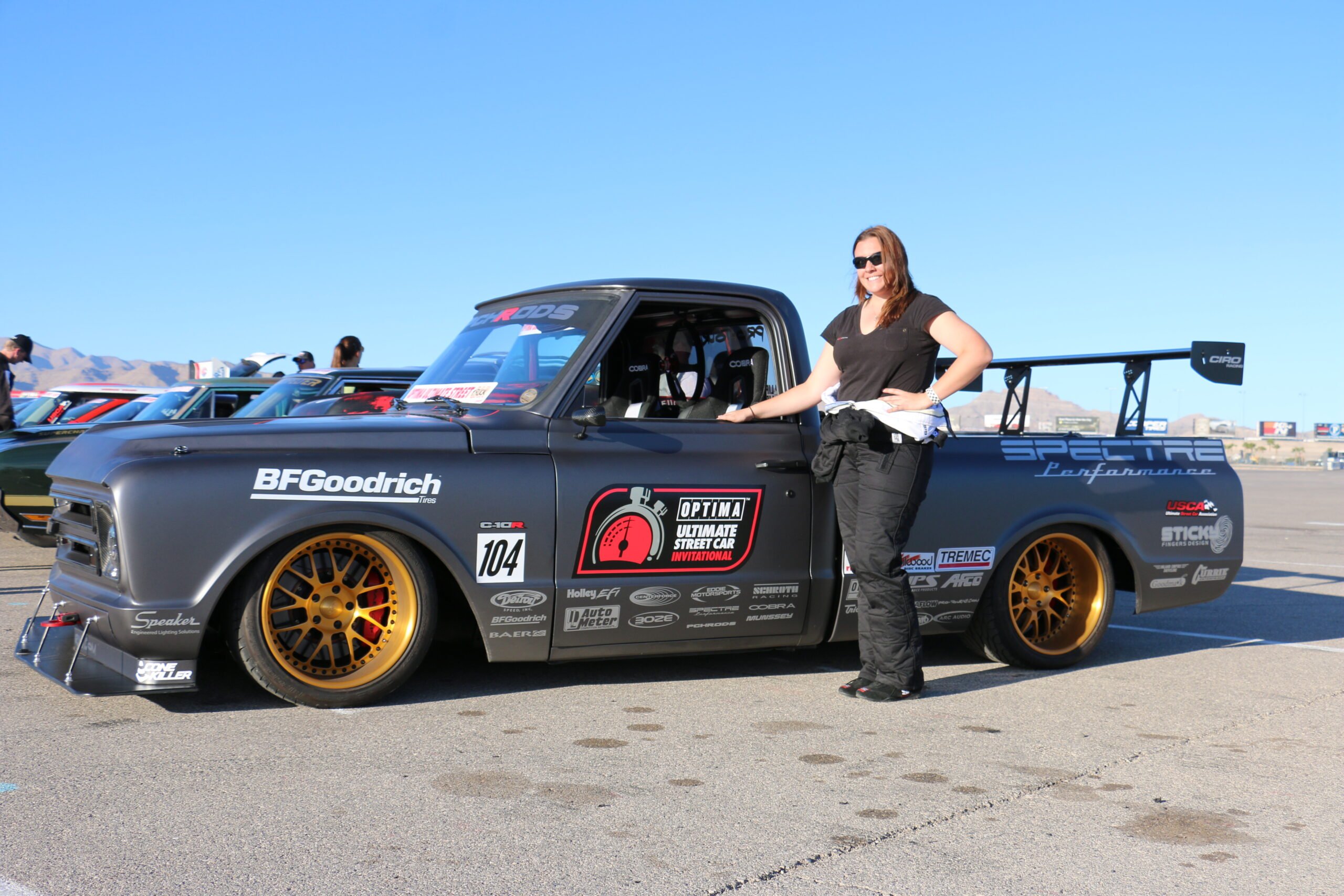 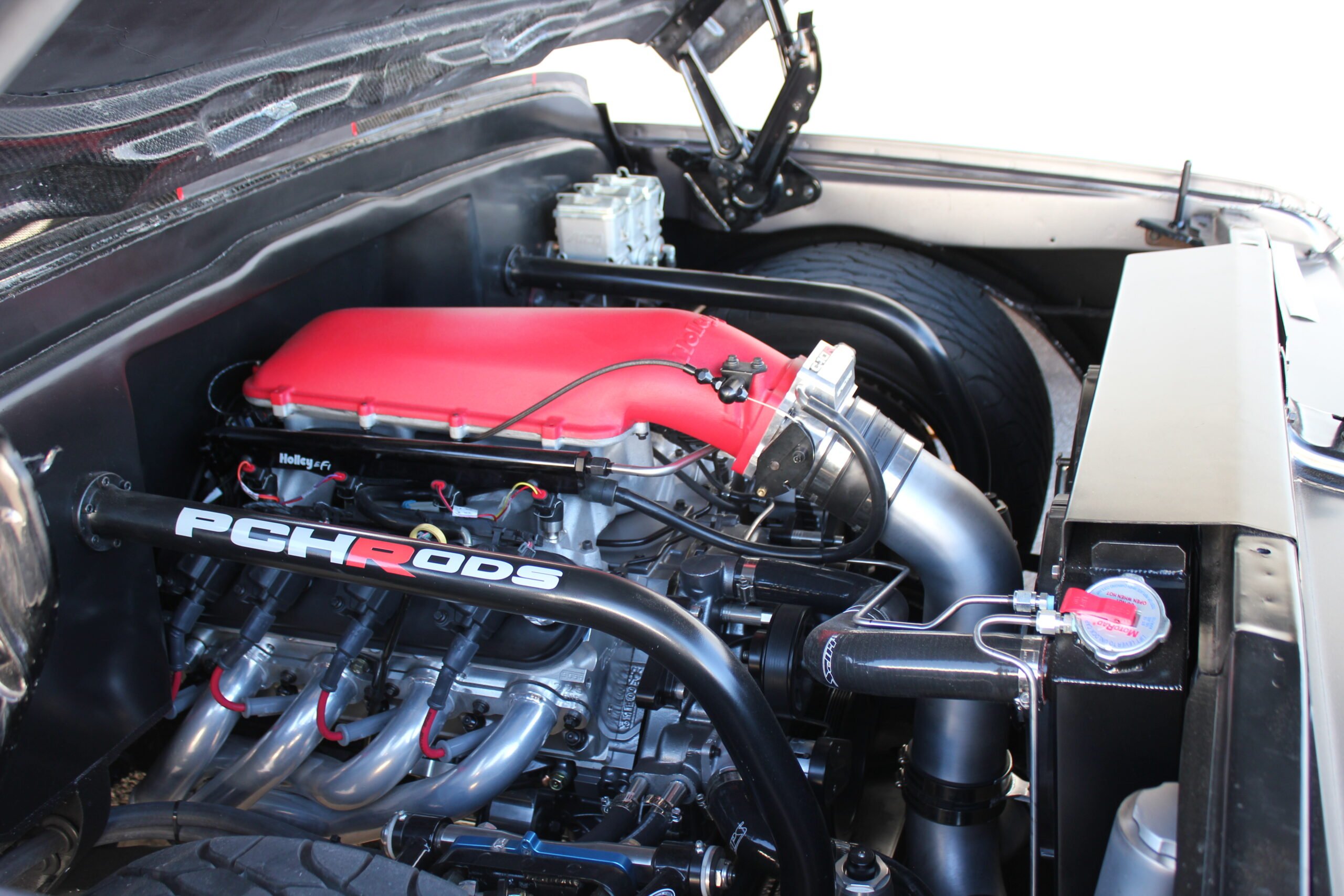 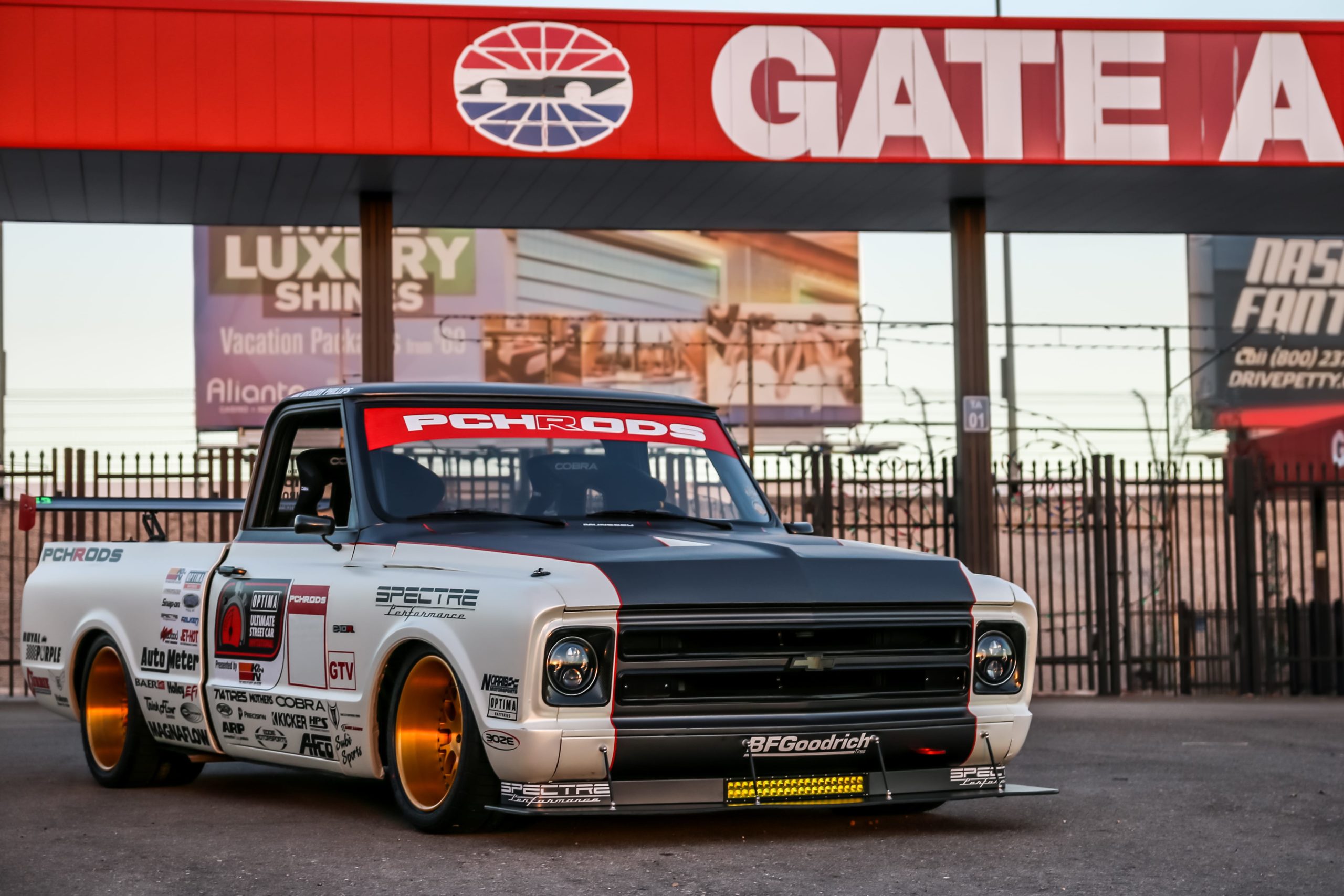 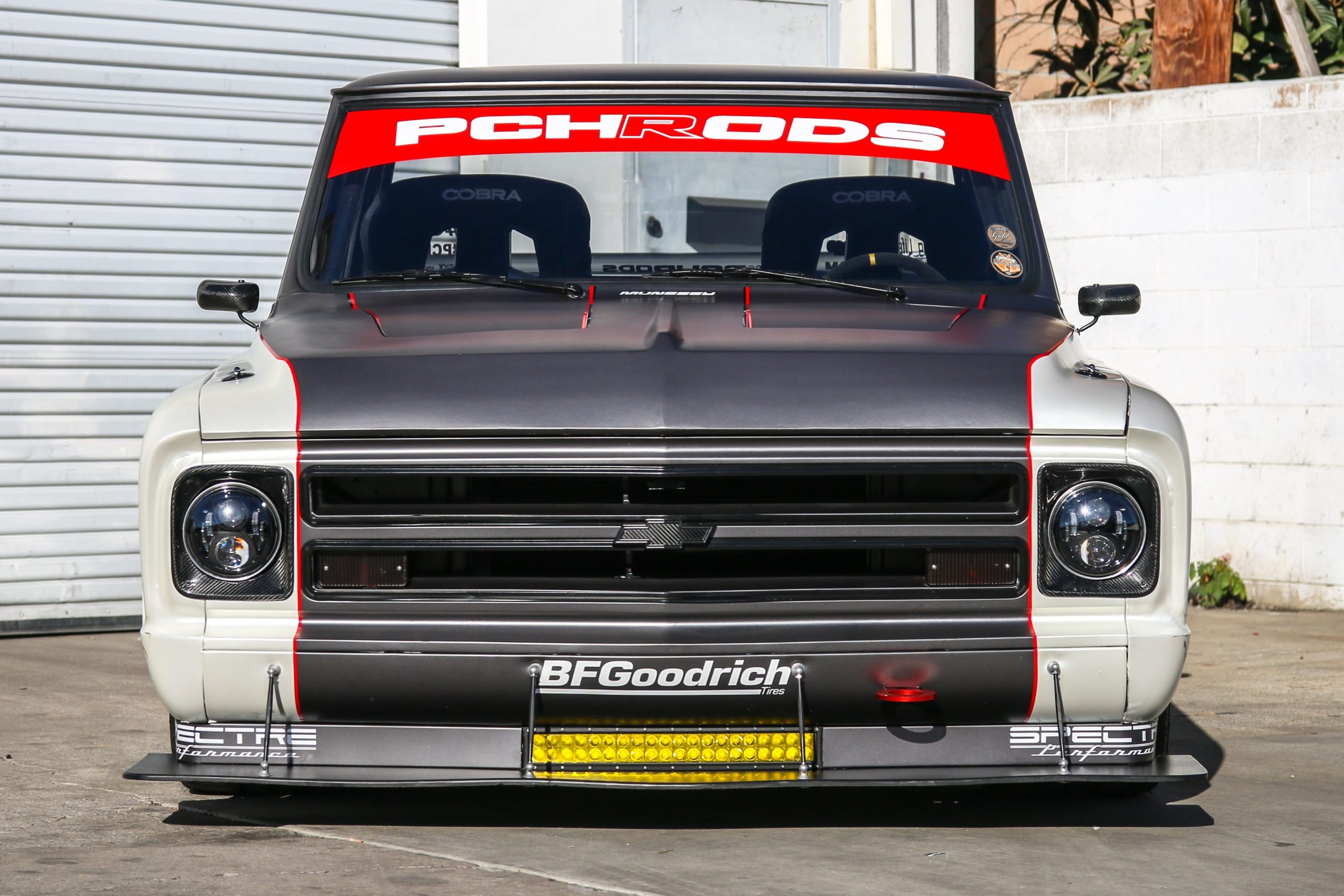 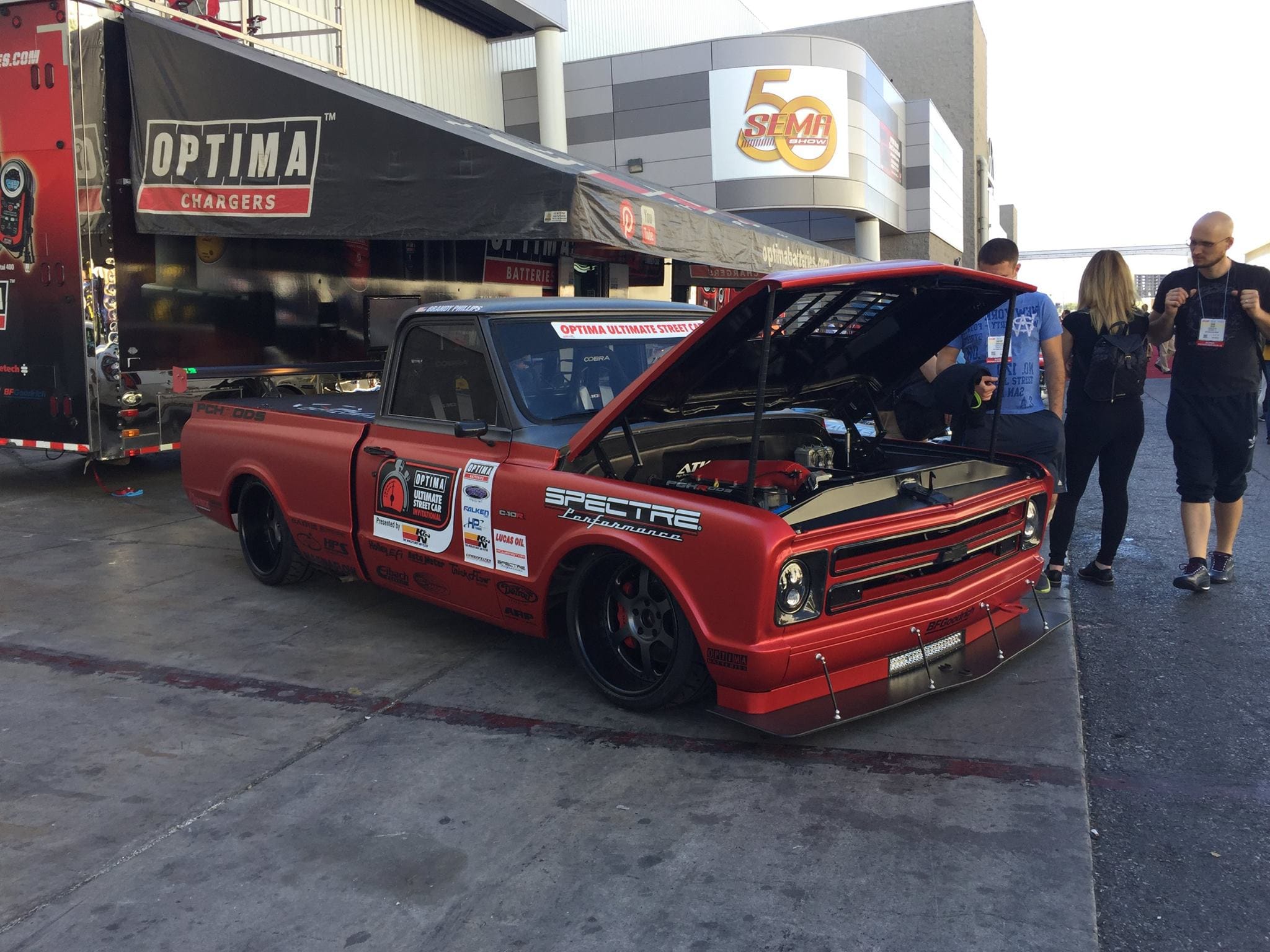 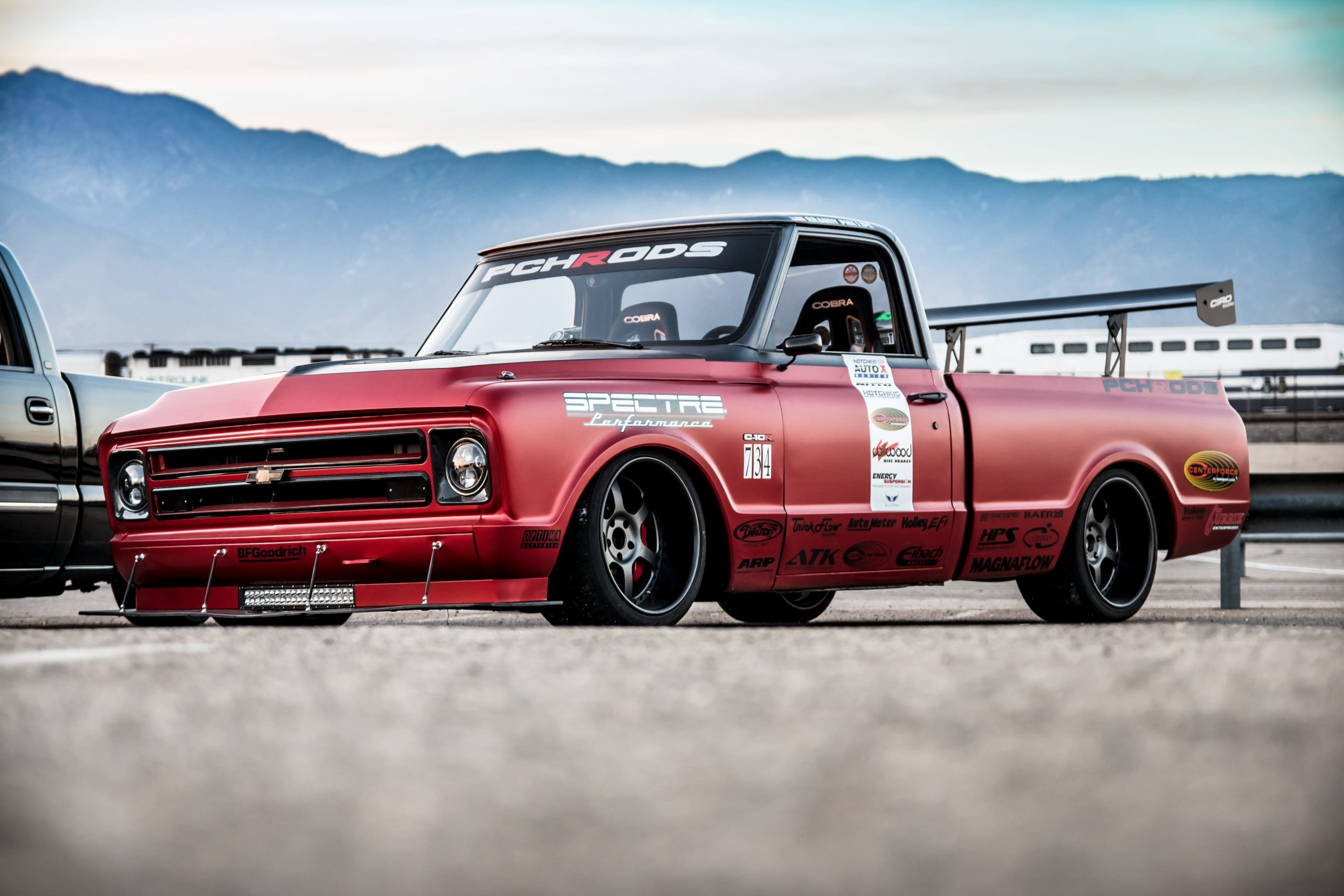 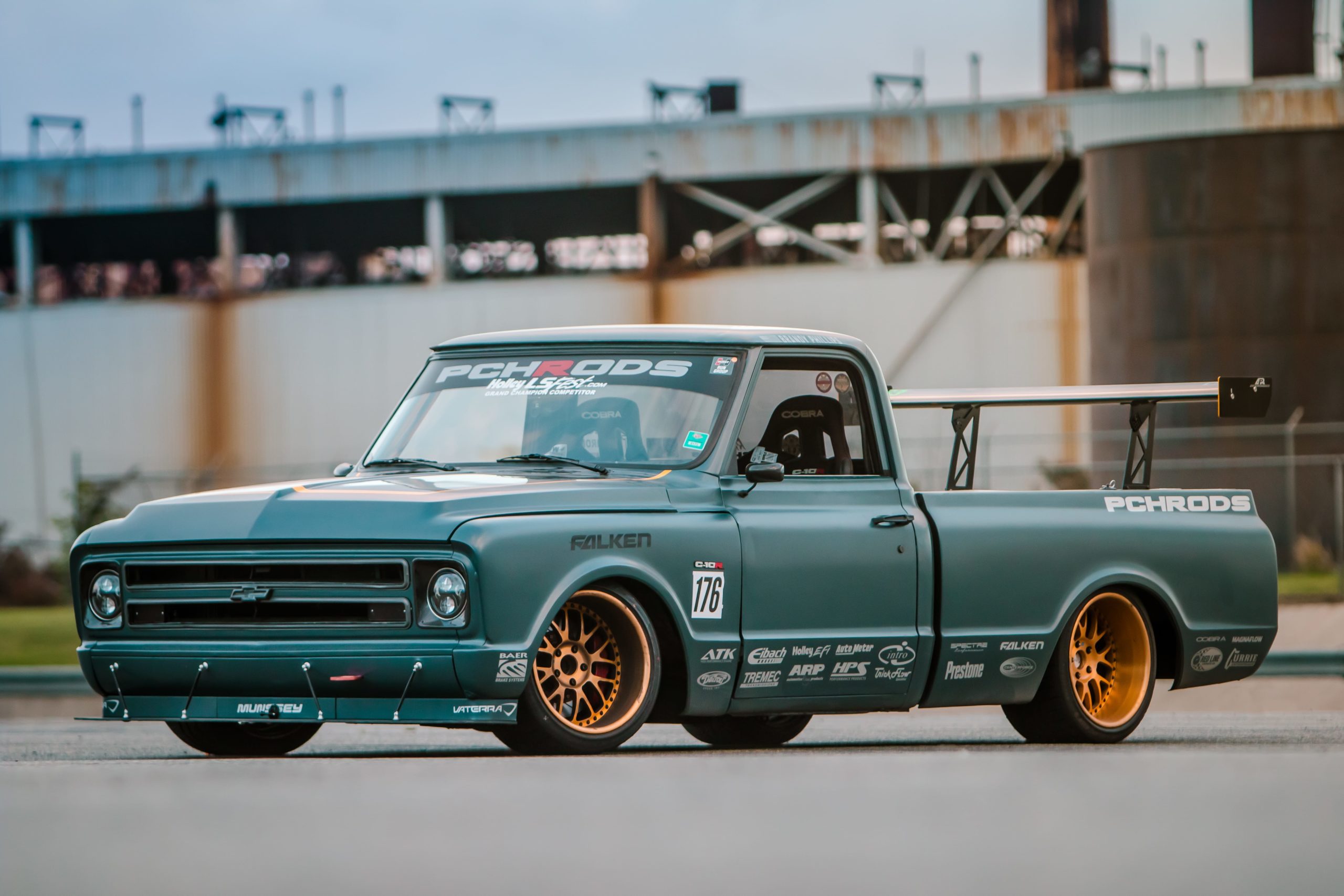 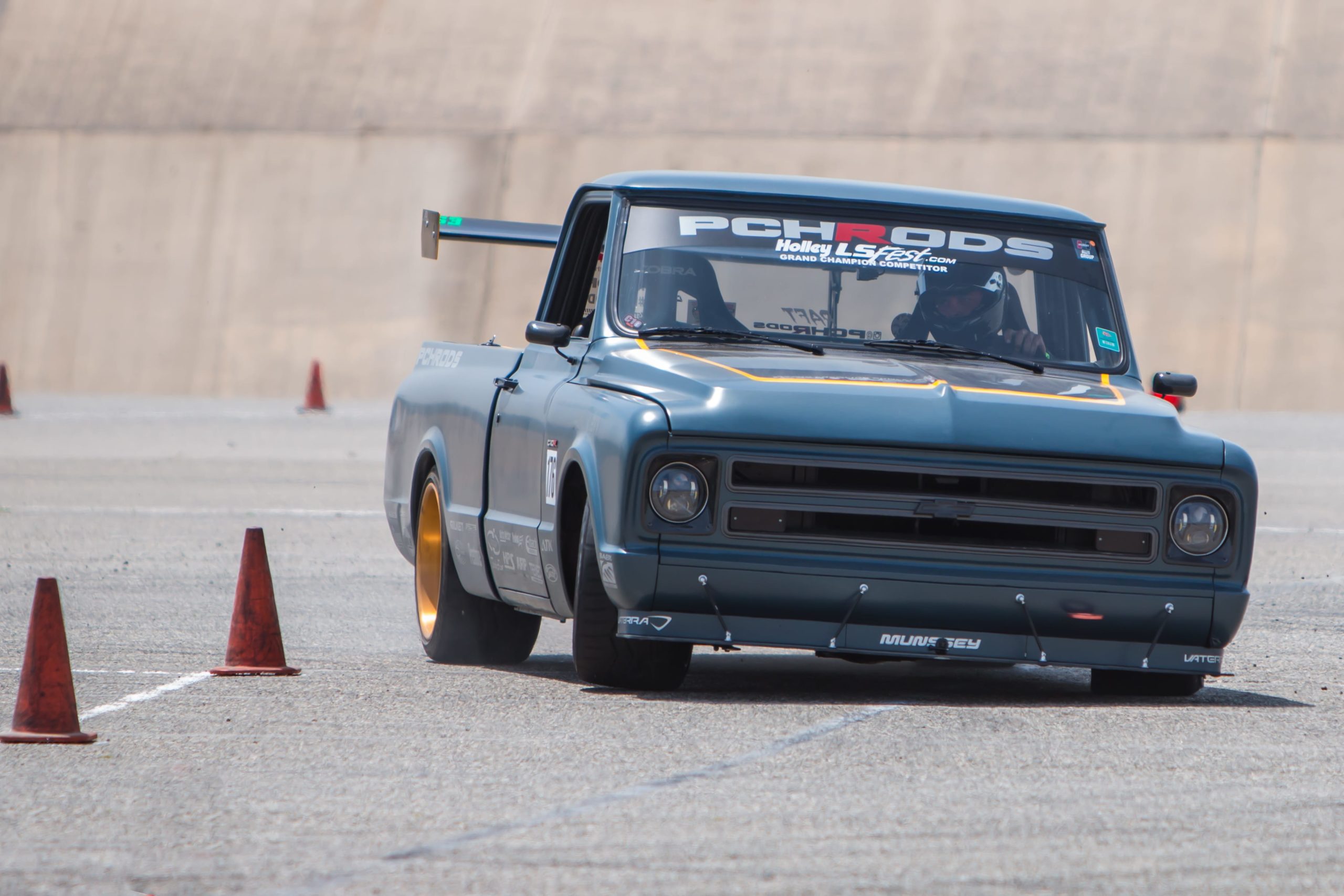 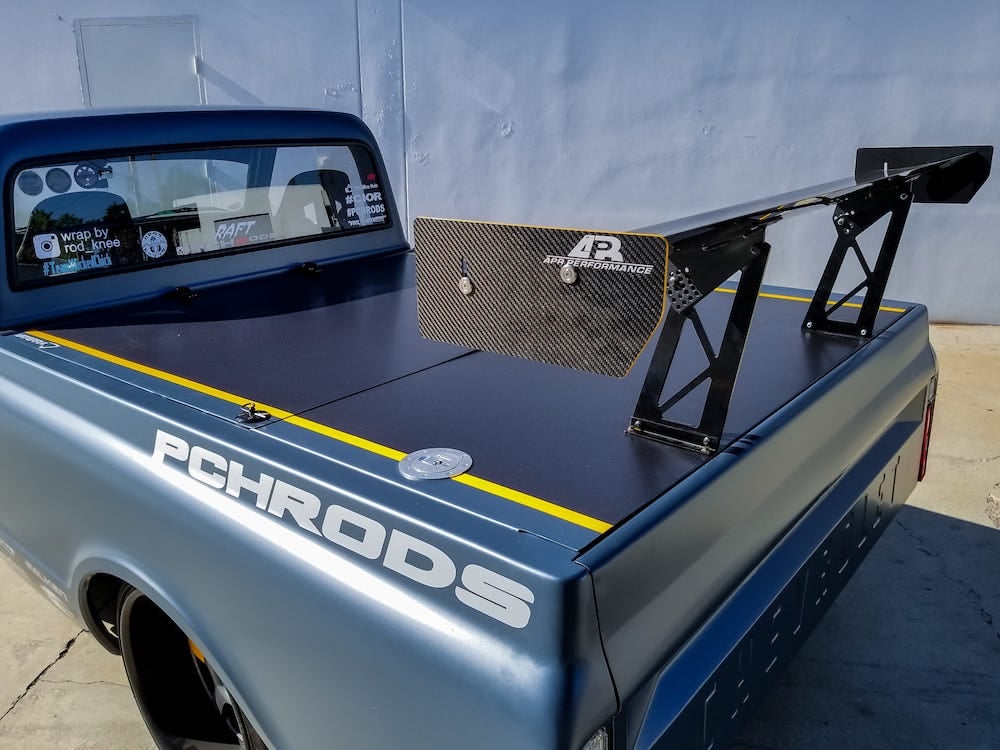 In 2010, Rob Phillips met his future wife, Brandy, at a Goodguys Autocross event. Brandy had a long career in racing pro-touring vehicles. She raced Spectre Performance vehicles including a 1970 mid-engine El Camino, a 1970 Mach 1 Mustang, a 1971 Green Camaro and her favorite, a 1970 Wide Body Carbon Fiber Camaro.

Rob, who was a Project Manager at Overhaulin, took to the wheel of his 1969 C10, which was originally a show truck. Rob was one of the original pioneers of the pro-touring truck movement.

Unfortunately, Brandy’s racing career for Spectre Performance ended much sooner than planned. Rob quickly realized that Brandy fell into a slump without having a vehicle to race on the pro-touring circuit. Rob gave her the option of having a wedding or building a race truck. Naturally, she chose the truck. They decided they would need another C10 so she could race again.

The husband and wife team created their plans for their next build, the C10R, over several late nights at home. Rob’s truck was well known within the pro-touring community, so expectations were high for round two. Knowing that several other people were building pro-touring trucks at the same time as the C10R, Rob and Brandy had to figure out what would make their truck stand out amongst the rest.

The couple turned to Google to get ideas when they came across a picture of a Pagani Zonda R. Rob fell in love with the car. The look was extreme and the color combo was not currently in use. People would either love the truck or hate it, but everyone would talk about it. Going with an import meets muscle car look was a little risky since many truck enthusiasts were purists.

There were two main goals that needed to be met once the C10R was finished. The first goal was to promote as many automotive aftermarket companies as they could. They wanted to support their sponsors, help increase sales, and encourage others to build cool trucks to race. Everything on the truck is a purchasable product with very few modifications. People can relate to the C10R when they get up close and look at each product that was used. By using parts that anyone can purchase, they are not only helping their sponsors but also showing that it is possible to build a truck, keep it on a stock frame and perform well at a race.

Their second goal was to embrace the lifestyle of the pro-touring community as a family. In order to do this, Brandy wanted to have the ability to include a baby seat in between the two race seats. Brandy was able to find a car seat that fits between the two Cobra seats and Rob was able to get the car seat mounts into the existing Cobra seat brackets. This allowed them to bring their youngest son, Parker, along with them to single day local events.

The truck was built over the course of three years. The build took a little longer than usual as the couple was expecting their son in May of 2013. Rob wanted Brandy to be a part of the build as much as possible. She was the one that would be behind the wheel, so he needed her to understand the mechanics of the truck in case something ever went wrong on the track. The couple did as much as they could together, though they had to reach out to family and friends for additional help on in order to complete it by the reveal date at SEMA.

Brandy took her previous marketing experience from working at Spectre and decided to create a unique marketing package for the C10R. They posted the full build on Instagram right as the app was gaining popularity. People quickly started following the build, as the couple shared sneak peek shots every day. A fan group started to form to keep up-to-date with the build and see the finished product in the final debut video released on the first day of SEMA.

Though the majority of the feedback was positive, there were some negative comments. The couple received harsh feedback that the C10R and Zonda should never be compared since they looked nothing like each other. The couple never intended to copy the supercar, only to use it as an inspiration and incorporate as many details from the Zonda into the C10R. As quick as people were to criticize, people were even quicker to defend the truck. Both Brandy and Rob feel that they accomplished their goal, as the C10R became viral on social media.

After completion, there have still been many changes to the C10R. When building the C10R, there was a lot of guesswork in the build. One of the problems Rob and Brandy encountered was the lack of parts available for C10’s for the type of racing that they were participating in. There were a lot of entry-level performance parts, but not too much that was a direct bolt-on remedy to keep up with C2 and C3 Corvettes that were a thousand pounds lighter.

Rob and Brandy learned a lot about what did not work immediately following their first big event at the Optima Ultimate Street Car Invitational. They were invited as a Golden Ticket Winner to compete at OUSCI in 2014, immediately following SEMA. The main goal was to pray the truck did not break at the event. There had been very little testing before SEMA. The couple spent two track days sorting out some quick settings before the truck was loaded on a trailer and headed to Vegas.

The truck was originally wrapped in a 3M Matte Metallic Grey to maintain the theme of the Pagani Zonda. For the 2014 SEMA Show, the couple re-wrapped the truck to look like an Audi Le Mans Race Car with a new color scheme, light-up number panels for the door and a light bar on the front splitter. Rob and Brandy continue to re-wrapped the truck each year to fit a new theme. So far, the truck has been four different color schemes and there is discussion of returning back to its original colors for the 2020 season.

Initially, the C10R started with a 5.7L iron block. Brandy had wanted something with a bit less horsepower in order to dial-in the truck at autocross events. With such a large vehicle, the balance of horsepower was a key element in getting the truck to handle properly around the tight course. Once Brandy got used to the truck and the suspension was dialed-in, it was time for a new motor. The couple went with an ATK 383 stroker motor with a slight increase in horsepower and a significant difference in torque. The increase in torque was a definite upgrade as the slightest improvements off an autocross starting line make a significant difference in the overall time. With time the competition grew more difficult as more and more trucks jumped on the pro-touring movement. Though the 383 stroker was sufficient for one season, another motor upgrade would be needed to keep up with the competition for the 2018 season. With the 416 LS3, the C10R currently sits around 640 hp and 630 tq.

The wing and splitter are two key features that make the look of the truck. Not only do these modifications make the truck very unique, but they also serve a purpose. Brandy’s brother, Ryan, worked for a company that had wind tunnel software testing abilities. Ryan made a 3D model of the C10R to spec in CAD and tested various wing configurations at different heights, locations, and speeds. The testing took a couple of months, but the data acquired was priceless. Rob and Brandy confirmed the type of wing needed for the truck was much taller than what everyone else was using. In 2015, Brandy and Rob had to redesign the wing again when wing restrictions were the main topic for the 2015 Optima season. Currently, they swap between the two wings depending on what race series they are competing in that weekend.

During the install release of the C10R, Rob installed AutoMeter Pro-Comp race dash, which the couple ran for about six months.

The couple was approached by AutoMeter and asked to help test the LCD Competition Dash, which was brand new at the time. The dash does everything from the simple speedometer and RPM to recording track lap times, monitoring tire pressure and providing progressive stage shift lights. A technician from AutoMeter flew out and helped set up the fully customizable dash. The LCD Competition Dash is still in the C10R today, which is usually left on for people to glance at and talk about as they pass by the truck.

The C10R was initially equipped with BF Goodrich KDW’s 335/30/18’s on all four corners. When the BFG Rival S came out, they ordered a new set in the same size. Both tires were rated as a street tire, but the KDW’s were 400 tread compared to the Rival S’s 200 tread. Brandy was not convinced that changing tires would make a huge difference. To test the new tires out, they did a two-day track event to compare. On the first day, she ran the old tires. On the second day, she ran the Rival S tires. On the second day, Brandy was able to shave seven seconds off her fastest time with her old tires. The BFG Rival S tire proved that a good tire does make a difference and made the truck a completely different animal out on the track.

The C10R has won several awards on and off the track. Awards include:

The truck has also been featured on several television shows, commercials, and online videos. The truck made two appearances on the show Optima’s Search for the Ultimate Street Car. It was also featured in an AutoMeter commercial that aired on Discovery. A DRIVE / BIG MUSCLE feature was done on the truck with Mike Musto that helped grow its popularity. A full feature on the truck was in Street Trucks Magazine and the truck is currently the platform for several other stories within the magazine, including racing articles and tech stories. The C10R can also be found in magazine ads for brands like Spectre Performance, Optima Batteries, AutoMeter, Currie Enterprises, and Baer Brakes.

After five years, Rob and Brandy thought the appeal of the C10R was starting to fade. For many vehicles, it becomes a “been there seen that” sort of thing. Surprisingly, as Rob and Brandy ventured to new shows throughout the 2018 and 2019 season, the truck still caught the attention of several onlookers.  Though many of the onlookers were familiar with the truck, there is always a handful that have never seen it before and it in awe when walking around it. The couple often ponders why the appeal of the truck continues and why the truck still has the ability to go viral online and in person. The only answer they have is there is still nothing quite like the C10R. Though there are other race trucks that have debuted in the past couple years, no one and nothing comes close to making the appearance of the C10R.